Description
Created in late 2009, the architecture studio AUXAU is primarily intended as a place of research and study at the service of man and its habitat , acting on its immediate environment.

The studio is organized around a friendly and playful space for reflection and research . The working themes are generic : street furniture , architecture, urban planning. The limit is often blurred ... It allows to approach each project in a special way , developing proposals in line with the context in which they operate.

The work of the material as a "skin of space" is also an important research area that tries to exploit the workshop in each of its projects.

Honorary mention at the Ixelles Architecture Award 2019 for the Renier Chalon project, in temporary association with MAMOUT.

Winner for the construction of 3 houses with social vocation for the property management of the city of Brussels. Ongoing project.

Winner for the creation of new classes at Saint Joseph Elementary School in Uccle.

Winner for the renovation of social housing in an experimental program PP. Municipality of Schaerbeek.

Winner for the creation of new classes in the Saint Antoine primary school in Forest.

Winner for the complete restoration of the Saint-Henri Church, in A.M. with Parallel Architecture.

Winner for the construction of 36 new low-energy housing on the site of the Faculty of Gembloux, in A.M. with WHY.

Winner for the construction of a zero energy communal hall and the landscaping of a 6Ha site in Andenne, A.M. with 3A.
[...]
Publications
Architectures Wallonie-Bruxelles Inventories # 1 (2010-2013): AUXAU is pleased to be one of 30 selected and published projects on more than 1,000 projects inventoried by the Orthodox Collective. 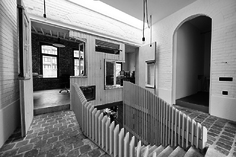